For the People is a grand strategy game of the American Civil War covering the conflict from Texas to Pennsylvania, from the firing on Fort Sumter to the end at Appomattox Court House. You take the role of either President Lincoln or President Davis and command the armies, promote and relieve generals, conduct amphibious assaults, dispatch cavalry raids, and even battle incompetency and political intrigue among members of your own cabinet.

For the People includes a deck of strategy cards for conducting campaigns and incorporating the many events and personalities of the war. The Confederate player can build ironclads, naval mines (torpedoes), submarines, conduct overseas purchases, and work towards foreign intervention. The Union player can build up his naval blockade, his ironclad fleet, fight draft riots, secure the Border States, and issue the Emancipation Proclamation. Relive the history of this exciting time when our nation was torn asunder.

1. The Valley rule has been changed. The Valley acts as a supply source only during the attrition phase for one force. This simplification ended what would have been an additional two pages of text to stop James from abusing my good friend David Dockter with this rule in the future.

2. There is a rule buried in the RR rules that the South in 1864 can complete two rail connections. In six years I have only heard of one occasion when anyone actually did it in a game. The change in the rule is the rail completion is now automatic for the South and does not require the play of an OC.

3. I added the cavalry replacement rule from c3i into the rules, so folks would know what to do with the counters. The rule is added as an optional rule, but we are going to use it at WBC.

4. There is no four that I can remember, so unless I forgot something that covers all of the rules changes. Actually there is a four, which is Harrisburg is once again the capital of Pennsylvania and Philadelphia's special capital location ability remains, but is clarified.

The hardest thing changed in the rules was ensuring that the comprehensive example of play was legal. This took an enormous effort, was checked by multiple experienced players, multiple times, and I am sure there is still an error in there somewhere. Anyway, I am sure someone will point out that error shortly, but if you think this is easy, you have never tried to do it.

Counters: There are no changes to any of the counters, to include values etc. I do note that the presentation of the leader p ratings is different, but the values should all be identical. We added in the c3i counters by removing some PC markers, so if you were not a subscriber, you would be missing these if all you had were the original GMT version.

Map: The map is unchanged in content, but we added a few symbols to make some things a bit clearer. The Valley is highlighted, Union State capitals are marked with a star, Philadelphia has a unique star for Capital replacement purposes. There is also an orange vice red blockade arrow at St. Marks Florida to coordinate with one of the new cards. We also deleted the blue bar at the top of the Dover space as it was not necessary.

Cards: There are 20 new cards...do you need them? That is up to you, but unless you intend to play at WBC, not having them carries no social stigma and will not impact internet play via ACTS. I will be publishing a new cyberboard set shortly that has all of the original artwork and the new cards included for those who want to use the reprint, but whose budget cannot support the purchase. Of course the GMT boys are selling individual decks, so this is the quickest and cheapest way to get the new stuff.

111: 2OC (Union event) Wilson's Raid: Union may place two Union PC markers in any spaces within four spaces (includes river connections) of a single Union cavalry brigade. The four space range CAN be traced through Northeast Alabama. These PC Markers (in contravention of rule 11.3D), CAN be placed in blockade runner ports/ and or resource spaces devoid of Confederate SPs or forts (but may contain an Ironclad or Torpedoes), resulting in their immediate destruction. Remove from deck if event is played.

114: 3OC (Union event) Frederick Douglas: Union immediately receives five SPs for raising freemen Negro troops. The SPs can be placed in any Union controlled space (all SPs placed in the same space) with a LOC in NJ, DE, PA or the space that contains the Union capital that does not contain Confederate SPs or forts. Remove from deck if event is played.

115: 2OC (Confederate event) Galviston: The Confederate player may move 1 SP from a blockade runner port (open or closed) to its associated ungarrisoned Union controlled coastal fort (no Union SP present) and immediately place a Confederate PC marker (does not require a LOC) in the Coastal fort space. Remove from deck if event is played.

118: 3OC (Confederate event ) Mexican Supply Line: Confederate player receives 2 SP in any friendly controlled Texas space (both SPs placed in the same space). The space does not need a LOC. The space may not contain Union SPs or forts. If no eligible space exists the SPs are lost.

119: 3OC (Union and Confederate event) War in the West: Valverde/Glorietta Pass: Randomly remove one strategy card from your opponents hand which is discarded. Remove from deck if event is played.

122: 3OC (Union event) Cabinet Overrules General Lee: If two or more Confederate armies are in Virginia, the Confederate player places (Confederate choice) one army (placed, not moved) in a Confederate controlled Resource space (destroyed or not), Riverine port, or Blockade Runner port (open or closed) in Tennessee, Alabama, Mississippi, Arkansas, Louisiana, or Texas. Remove from deck if event is played.

123: 1OC (Union or Confederate event) Quantrill's Raiders: If played by the Confederate player place or flip 2 PC makers in a Missouri space (except St. Louis), which does not contain Union SPs or forts. If played by the Union player increase Union SW by 1 for increased resolve due to atrocities. Remove from deck if event is played.

124: 2OC (Union event) Confederate Desertion: Can be played as an Interrupt card to cancel the activation of any Confederate force, OR during a Union player's turn to cause a Confederate force to immediately execute an attrition procedure plus conduct Forage if force has no LOC. Remove from deck if event is played.

125: 1OC (Union event) Confederate Locomotive Shortage: The Union player may randomly remove one strategy card from the Confederate hand which is discarded. Remove from deck if event is played.

126: 1OC (Union event) Valley Devastation: If Union infantry SPs are in one or more Shenandoah Valley spaces the Union player places a destroyed Resource marker in all Shenandoah Valley spaces that do not contain at least one Confederate SP or fort. These destroyed Resource markers cannot be removed and prevent the Confederate player from using the Shenandoah valley as a supply source for the remainder of the game. Remove from deck if event is played.

127: 2OC (Union event) Brooklyn Navy Yard Conversions: The Union blockade level is increased by one. Remove from deck if event is played.

128: 3OC (Confederate event) Union Naval Supply Shortage: The Union blockade level is decreased by one. Remove from deck if event is played.

130: 3OC (Union) Union Siege Guns: Union plays card at beginning of a battle (or Amphibious Assault) that has a Confederate fort present and cancels Confederate fort die roll modifier in the battle. Remove from deck if event is played. Draw a strategy card. 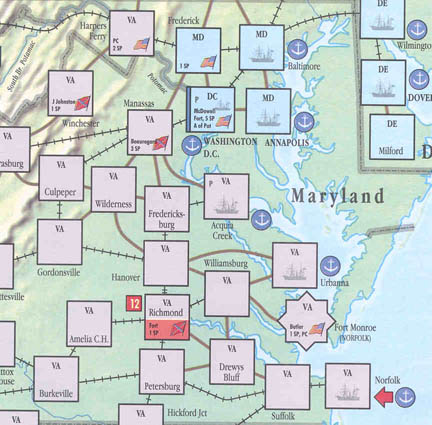 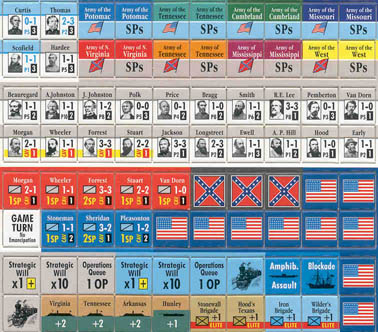